Trump in Tulsa: Stories from the ground as Trump comes to town

Ready or not, here he comes. Attendees awaiting President Donald Trump in the hours leading up to his speech at the BOK Center in Tulsa on June 20, 2020, chant “Make America Great Again.” DYLAN GOFORTH/The Frontier

The Frontier staff is reporting on President Donald Trump’s rally in Tulsa on Saturday and will have updates throughout the day. 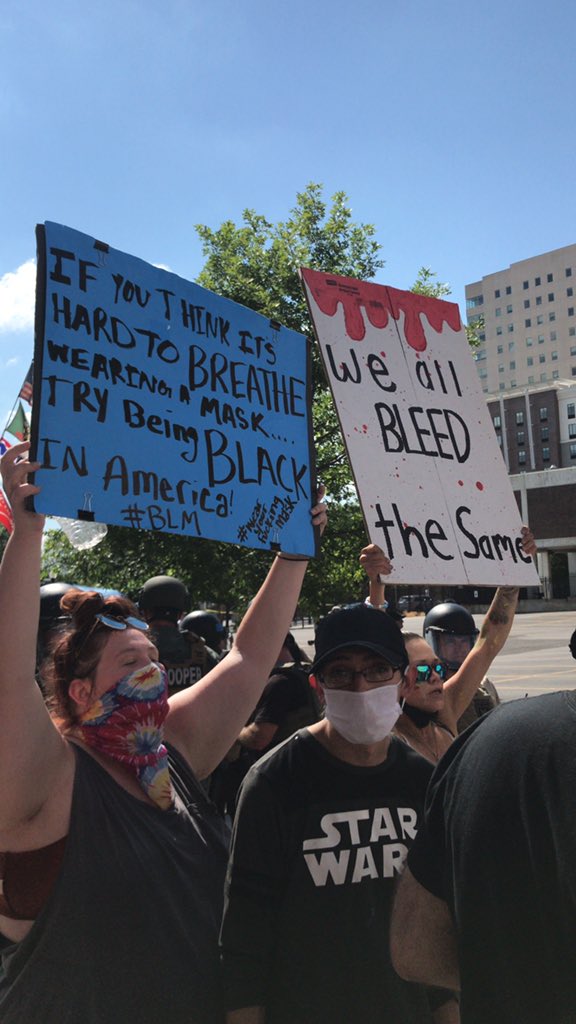 Protestors outside the rally zone near the BOK Center in Tulsa ahead of President Donald Trump’s speech on Saturday, June 20, 2020. KASSIE McCLUNG/The Frontier

Shortly before 4 p.m. a group of protestors and event attendees near the east entrance to the rally zone were pushed back by police after people began throwing things over the barricades. Police temporarily closed the entrance, but began letting people in again after a few minutes and after pushing the crowd back several yards.

Though there were heated words between some of the rally-goers and protestors, both sides remained peaceful. Eric Trump gives a brief interview in the BOK Center in the hours ahead of President Donald Trump’s speech on Saturday, June 20, 2020. DYLAN GOFORTH/The Frontier

Inside the arena, where attendees are slowly trickling in while awaiting a speech that could be three or more hours away, the biggest cheers so far have been for a brief visit from Eric Trump.

Eric Trump walked onto the arena floor for a short interview with a television network on the broadcast media platform, then walked away to cheers and chants of “four more years.”

The crowd, which is first come, first serve, has filled about two-thirds of the BOK Center’s lower bowl, with noticeable gaps in areas without a sight line to the podium. The BOK Center holds 19,199 people. Stitt will be meeting with the VP in Greenwood shortly. I asked what he wanted to talk about. pic.twitter.com/bFdxU5iL6G

Hours before the start of President Donald Trump’s rally in Tulsa, Gov. Kevin Stitt said he remained confident the nation’s first major indoor event since the beginning of the coronavirus pandemic would not lead to a new outbreak.

COVID-19 cases in Oklahoma have spiked over the last week but Stitt said it hadn’t led to a significant increase in deaths or hospitalizations.

“My question back to those folks that want people to bunker in place is when is the right time to open back up?” Stitt told reporters outside the BOK Center, where Trump’s rally will be held.

Stitt was scheduled to welcome Vice President Mike Pence Saturday afternoon and take him on a tour of the Greenwood District, the site of the 1921 Tulsa Race Massacre.

Six staffers who worked on the Tulsa rally tested positive for the coronavirus before the event, the Trump campaign said Saturday.

In a statement to CNN, the Donald Trump campaign's communications director Tim Murtaugh confirms that six staffers working on tonight’s Tulsa, OK rally have tested positive for coronavirus and are now following quarantine procedures. NBC was first to report. pic.twitter.com/7JUHzCYMO9 A sea of red hats, Trump flags and banners, as well as an occasional Confederate battle flag swayed in downtown Tulsa on Saturday morning. Above, in the windows of a hotel were signs supporting the Black Lives Matter movement.

Vendors in mobile booths and some toting their wares in red wagons packed the sidewalks. One woman began praying through a bullhorn, asking God for protection and guidance, as armed National Guard troops stood sentinel yards away.

Dressed in red, white and blue Randal Thom waved large Trump flag. He drove from Minnesota to attend the rally.

Tulsa will be the 64th event  Thom has attended as a member of  “Trump’s Front Row Joes,” a group that  travels around the country to attend Trump rallies.

“Us Trump people, his base, have been itching to get back out to show him we support his decision and especially support the fact we want the entire country opened up,” Thom said. “What this will be showing the country and the world we can have a normal rally, a normal get-together and we don’t have to be afraid of that virus — the China virus. It’s time for us not to go to a new normal, but to go to a real normal.” At least 1,000 people are already in downtown Tulsa hours before the doors open for the rally. Few people gathered at blocked entry points waiting for the gates to open are wearing masks. There are police barricades and other 8-foot tall fences surrounding the BOK Center. As many as 100,000 people are expected downtown for the rally this evening. On Friday, Tulsa Mayor G.T. Bynum rescinded a planned curfew covering a portion of downtown that includes the BOK Center, the site of  Trump’s rally this weekend.

Tulsa Police Department said Friday that a secure zone has been established by the United States Secret Service to give law enforcement “the ability to keep the area clear of individuals that are only present to break the law and disrupt the rights of people assembling peacefully,” according to a news release.